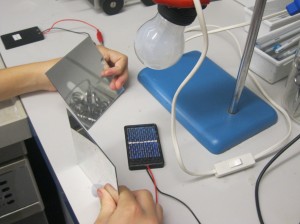 Set up of experiment

Light bulb 22 cm above solar pannal. In a room with no light. Solar pannal directly below light.

How Solar panels solves the problem of Climate change

Solar panels solves the problem of climate change because in our world we have too much carbon dioxide and fossil fuels and natural gasses are polluting our world. If we use solar panels then we don’t use any of these things. It doesn’t use any oil, gasses or carbon dioxide. Even though it may not produce as much electricity as normally it is still the better choice. People often don’t buy these solar panels because they cost a whole lot more than otherwise. Solar panels are set up like this,  they have VV cells which have at least two layers, which are the negativley doped silicon and, the positivily doped silicon on top of both of these is the transparent protective layer. When the light hits this, the electric feld across the junction between these two layers causes electricity to flow. The more light the more electricity.

In this link it shows how solar photovoltaics are made and how they give off energy.

Main idea: The main idea is to test each variable and see which one gives off the most electricity.

Hypothesis: I think that idea 2 will produce the most energy. This is because when you add the mirrors reflecting the light it gives off more light which is good because the light turns into electricity.

2.Would mirrors reflecting light on to the solar panels be a worthwhile idea?

3.Does the tilt of the solar panel make a big difference. Continually tilting the panels to follow the sun is expensive. Is it worthwhile?

Posted on August 27, 2010 by brithale
A lot of changes have happened in the past century, since the start of the industrial revolution, and a lot of changes are predicted to happen in the near future.
The main change is the warming of the Earth. Because of this, ice is melting and sea levels are rising. Soon the shorelines may be miles from the shoreline today. That would mean that like the movie The Day After Tomorrow, the entire Manhattan could be underwater. Other non-global issues are happening right now. A small town in Alsaska is being eroded away because of tide. Before, an ice barrier protected it but the ice barrier melted away, leaving the shore exposed to water. Here in Switzerland, a glacier melted, leaving a peak exposed. Mapmakers had to decide whether that peak was in Italy or Switzerland, and had to re-draw the map to put it in Switzerland. In Russia, there are numerous wildfires, which turned Moscow into a furnace and people are dying because of it. Climate Change has had bad effects on the more well-off people in U.S., Russia or Switzerland, but the people in poorer countries are having a really bad problem with drought and floods.
Humans are not the only things with problems. Animals, too are being hit hard by climate change. For example, rivers in Canada are heating up, thus the salmon that lay eggs there cannot do their thing, so there are less salmon, therefore, less Grizzly Bears, too, are dying, because they have nothing to eat.
Analysis shows that rich countries like the U.S., Saudi Arabia and Australia are causing the problems. The people who have the most problems with climate change are Uganda, Mali, and Mozambique, who are all poorer countries. Pakistan is having problems with big floods, currently.
Posted in Uncategorized | Leave a comment

The greenhouse effect is happening right now, all over the World. The greenhouse effect gets this name because the carbon dioxide (co2) that comes from cars, screens, and all kind of electric materials; makes the heat that comes from the sun stay in our atmosphere, and in a few years the temperature will rise about 4 degrees, which doesn’t seem much, but it is; some places turn into complete deserts.

The only thing that we have to get rid of carbon dioxide is the trees. The trees suck in the carbon dioxide and turn it into oxygen that we, humans breathe. But there deforestations (the cutting down of the trees) everywhere,

The earth goes through natural phases of increased CO2 and temperatures however after the industrial revolution it has increased dramatically. In the link bellow where the global CO2 levels of the last 400,000 it shows that in 1950 the CO2 levels were as high as they have ever been at 300 ppm. In 2010 the levels are at 375 ppm and are continuing to rise. (See second link for 2100 predictions.

The predictions from the second graph CO2 levels by 2100 are particularly poignant. If we allow this to continue then the entire average temperature of earth will rise by 4.5 degrees in the next 90 years. This may not seem like a lot but it all adds up.

So how did this all start? I hear you ask. It started with the industrial revolution, which started around two hundred years ago. The industrial revolution was when we as humans started to build factories and things that burn fossil fuels. When fossil fuels are burnt they release CO2 into the atmosphere, which increase global temperatures.  We also began to cut down more trees for building materials that were needed because of the rising population. Tree’s “inhale” carbon dioxide and “exhale” oxygen, so a lack of trees will increase CO2 levels and global temperatures.  We as humans need to change our ways if we’re going to enjoy this world for much longer.

Back in the days Interview

After school – Before and after

Before: After school people used to play sports out in the streets, such as football rugby and cricket, there was no traffic which made it mainly safe. The less fortunate would work on repairing the house because they couldn’t afford people to come and fix it. This would take up hours of their time. They would make up games such as Robin Hood, Ninjas and Pirate and House.

After: Now days we go home and usually do our homework because today we get much more, homework also takes a lot of time because we have more distractions. After our homework we usually go on our computers and go on various websites such as Facebook, Skype and Msn. They also play on video games and other electronic devises.

How has energy use changed during your lifetime?

At first the energy used to be very little. The refrigeration was very little, washing machines were very big and inefficient, there was very little central heating, and houses were extremely cold. There was no double-glazing and a lot more energy was being wasted and they didn’t even realize it! Now everything is much more efficient. The washing machines are fast and easy everything has become and is continuing to be much more high tech.

Have you noticed a change in the weather patterns?

Most people say that the weather has gotten worse. When Brittany’s grandpa was small his house was very cold and the weather seemed much colder. He used to live in England like Adams Grandpa and they both said that they had much more snow back in the UK in winter than they do now.

Some say that in the past it atmosphere was very, very polluted. But it generally seemed more polluted because people used to burn coal, which formed smog into the air, which made it, seem extremely polluted. Sometimes during the summer holidays when works were shut down you could see the hills 20 to 30 miles away, but when people were working 50 weeks out of the year you couldn’t see from one end of the town to another.  Now the air is much more clean but it is much more polluted.

Society throws away more waists now. 50 years ago when people used to go to the shops they would take a little canvas bag and always use that. Also when they got milk from the milkman they would get it in a glass bottle and when they were finished they would wash the bottles and give them back to the milkman. Now a day’s people wrap everything up in plastic bags, meat, and vegetables. We also now use cardboard boxes all of this is turned into waist.  Lets say if we go to a concert when the concert if finished look at everything that has been left behind, empty bottles, plastic bags, paper bags and many others. Back then they didn’t have anything to leave behind. Even though now we can recycle things not everything can be recycled.

When did people stop talking about climate change?

How did the industrial Revolution change your life?

It made life 50 years go much easier. For example when they had washday it took them all day. Sometimes the children would come home from school the kitchen would be flooded with wet water because it was raining. There was condensation everywhere. Now a days washing is done in about 2 hours. Now it is much better than it was 20 years ago.

How was recycling 60 years ago? There was barely any recycling, and that’s one of the biggest changes I felt.

The atmosphere covers the Earth. It is a thin layer of mixed gases which make up the air we breathe. This thin layer also helps the Earth from becoming too hot or too cold, much like clothing does for us. Weather systems, which develop in the lower atmosphere, Earth’s surface are driven by heat from the sun, the rotation of the Earth, and variations in the.

Without the greenhouse effect we could not survive because it would be too cold.

On the other hand, too much greenhouse gases can kill you.

Humans create greenhouse gasses. The gasses let in light but trap the heat, keeping it from escaping – like a greenhouse. Humans create them by deforestation and burning fossil fuel. The amount of greenhouse gasses has increased by more than a third since the industrial revolution. There is a limited amount of fossil fuel and it cannot be replaced (coal, oil and natural gas) – we are using it faster than the earth can reproduce it. We use fossil fuels for cars, homes, factories, electricity etc. If we kept using only fossil fuels, we wouldn’t have enough to last us the century, which is why we need to get energy from alternative places such as the sun (solar power), wind, nuclear power and geothermal power – energy which comes from deep inside the earth.

Scientists find it more accurate to use the word climate change instead of global warming, because as the earth’s temperature rises, winds and oceans move in ways that heat some areas and cool others, meaning that even though the majority of the world heats, some others cool as well.  This is a problem for animals as well. Some species will learn to adapt while others will just die off.

The difference between weather and climate is: weather is for just one day in a certain region or city, while climate is over a longer period of time and can exist in very large areas, even entire countries.

Climate change is causing glacier melting in parts of Antarctica and Greenland, and the increase of water will lead to mass flooding, drowning large parts of land in the future. It will also cause disease in many countries, food and water shortages and severe natural disasters.

Hey guys! This is my science blog!